Comerica Bank trimmed its stake in Essent Group Ltd. (NYSE:ESNT – Get Rating) by 1.7% during the third quarter, according to its most recent 13F filing with the SEC. The institutional investor owned 48,524 shares of the financial services provider’s stock after selling 824 shares during the period. Comerica Bank’s holdings in Essent Group were worth $1,783,000 at the end of the most recent reporting period.

Essent Group (NYSE:ESNT – Get Rating) last announced its quarterly earnings data on Friday, November 4th. The financial services provider reported $1.66 earnings per share for the quarter, topping the consensus estimate of $1.55 by $0.11. Essent Group had a return on equity of 20.33% and a net margin of 84.17%. The company had revenue of $261.77 million for the quarter, compared to analyst estimates of $241.69 million. On average, equities research analysts anticipate that Essent Group Ltd. will post 7.93 EPS for the current year.

The firm also recently announced a quarterly dividend, which was paid on Monday, December 12th. Stockholders of record on Thursday, December 1st were given a dividend of $0.23 per share. This is a positive change from Essent Group’s previous quarterly dividend of $0.22. This represents a $0.92 annualized dividend and a dividend yield of 2.25%. The ex-dividend date was Wednesday, November 30th. Essent Group’s payout ratio is 11.53%.

In other news, Director Aditya Dutt sold 6,000 shares of Essent Group stock in a transaction dated Friday, November 11th. The shares were sold at an average price of $39.23, for a total transaction of $235,380.00. Following the sale, the director now directly owns 23,023 shares in the company, valued at approximately $903,192.29. The sale was disclosed in a document filed with the SEC, which is available through this hyperlink. 2.90% of the stock is owned by company insiders.

Want to see what other hedge funds are holding ESNT? Visit HoldingsChannel.com to get the latest 13F filings and insider trades for Essent Group Ltd. (NYSE:ESNT – Get Rating). 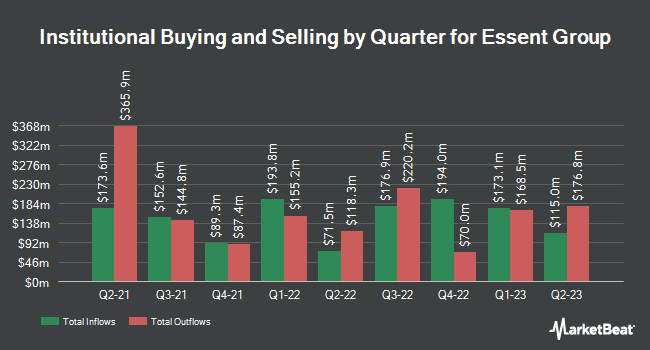 Alpha and Omega Semiconductor to Release Earnings on Monday