Henry Schein (NASDAQ:HSIC – Get Rating) was upgraded by equities researchers at StockNews.com from a “hold” rating to a “buy” rating in a report issued on Thursday.

A number of other research firms have also recently weighed in on HSIC. Morgan Stanley decreased their price objective on Henry Schein from $72.00 to $70.00 and set an “underweight” rating for the company in a research report on Wednesday, December 21st. Piper Sandler dropped their price objective on shares of Henry Schein from $96.00 to $85.00 and set an “overweight” rating on the stock in a research note on Monday, September 26th. Finally, William Blair reaffirmed a “market perform” rating on shares of Henry Schein in a report on Tuesday, November 1st. One analyst has rated the stock with a sell rating, four have issued a hold rating and four have assigned a buy rating to the company’s stock. According to MarketBeat.com, the company has an average rating of “Hold” and an average target price of $84.44.

Henry Schein (NASDAQ:HSIC – Get Rating) last issued its quarterly earnings data on Tuesday, November 1st. The company reported $1.15 earnings per share (EPS) for the quarter, topping the consensus estimate of $1.14 by $0.01. Henry Schein had a net margin of 5.06% and a return on equity of 15.48%. The company had revenue of $3.07 billion for the quarter, compared to the consensus estimate of $3.22 billion. As a group, equities analysts anticipate that Henry Schein will post 4.81 EPS for the current year. 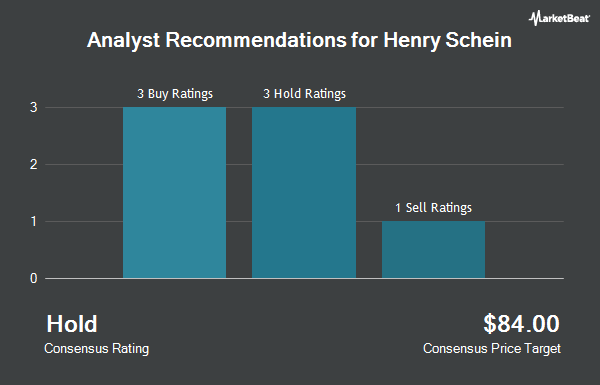