Otter Tail (NASDAQ:OTTR – Get Rating) last posted its quarterly earnings data on Monday, October 31st. The utilities provider reported $2.01 EPS for the quarter, beating analysts’ consensus estimates of $1.70 by $0.31. Otter Tail had a net margin of 19.69% and a return on equity of 27.09%. The business had revenue of $383.86 million for the quarter, compared to analyst estimates of $389.30 million. Analysts anticipate that Otter Tail Co. will post 6.6 earnings per share for the current year.

The business also recently disclosed a quarterly dividend, which was paid on Friday, December 9th. Investors of record on Tuesday, November 15th were paid a dividend of $0.412 per share. The ex-dividend date was Monday, November 14th. This represents a $1.65 dividend on an annualized basis and a dividend yield of 2.67%. Otter Tail’s dividend payout ratio is presently 23.54%.

In related news, Director John D. Erickson sold 2,000 shares of the firm’s stock in a transaction that occurred on Monday, November 21st. The shares were sold at an average price of $56.31, for a total transaction of $112,620.00. Following the transaction, the director now owns 3,633 shares in the company, valued at $204,574.23. The transaction was disclosed in a document filed with the Securities & Exchange Commission, which is available through this hyperlink. Company insiders own 2.00% of the company’s stock. 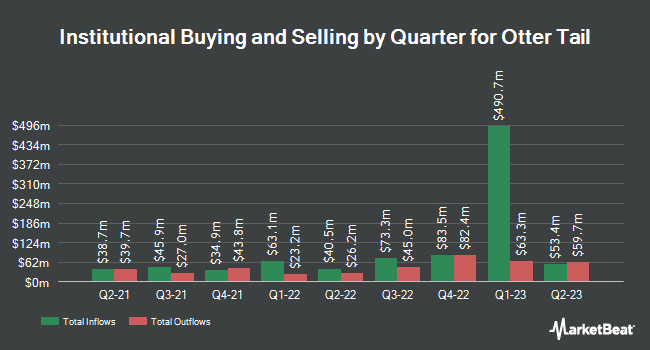 Critical Survey: Excel and Its Competitors

Gentera vs. Its Rivals Head-To-Head Contrast

Head to Head Analysis: Logiq vs. Its Competitors