Mohawk Industries, Inc. (NYSE:MHK – Get Rating) has earned an average rating of “Hold” from the sixteen analysts that are currently covering the stock, Marketbeat Ratings reports. Two equities research analysts have rated the stock with a sell rating, six have given a hold rating and two have given a buy rating to the company. The average 1 year price objective among brokers that have updated their coverage on the stock in the last year is $126.38.

In other Mohawk Industries news, insider Suzanne L. Helen sold 10,000 shares of the company’s stock in a transaction that occurred on Monday, December 12th. The shares were sold at an average price of $103.20, for a total transaction of $1,032,000.00. Following the completion of the sale, the insider now directly owns 15,953 shares of the company’s stock, valued at $1,646,349.60. The sale was disclosed in a filing with the SEC, which can be accessed through this link. 17.40% of the stock is owned by corporate insiders.

Mohawk Industries (NYSE:MHK – Get Rating) last released its earnings results on Thursday, October 27th. The company reported $3.34 earnings per share for the quarter, meeting analysts’ consensus estimates of $3.34. The firm had revenue of $2.92 billion during the quarter, compared to the consensus estimate of $3.02 billion. Mohawk Industries had a net margin of 1.53% and a return on equity of 11.32%. The company’s revenue was up 3.6% compared to the same quarter last year. During the same period in the prior year, the firm earned $3.95 EPS. As a group, research analysts predict that Mohawk Industries will post 13.02 earnings per share for the current fiscal year. 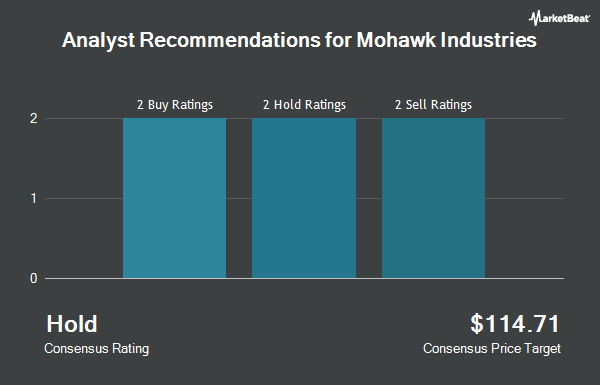