US Bancorp DE lowered its holdings in Globus Medical, Inc. (NYSE:GMED – Get Rating) by 1.9% during the third quarter, according to the company in its most recent filing with the SEC. The fund owned 10,076 shares of the medical device company’s stock after selling 190 shares during the quarter. US Bancorp DE’s holdings in Globus Medical were worth $601,000 at the end of the most recent reporting period.

In other Globus Medical news, SVP Kelly Huller sold 7,500 shares of the company’s stock in a transaction that occurred on Thursday, December 1st. The stock was sold at an average price of $75.00, for a total value of $562,500.00. The transaction was disclosed in a filing with the Securities & Exchange Commission, which can be accessed through the SEC website. Insiders own 24.41% of the company’s stock.

Globus Medical (NYSE:GMED – Get Rating) last issued its quarterly earnings data on Tuesday, November 8th. The medical device company reported $0.50 earnings per share (EPS) for the quarter, missing the consensus estimate of $0.52 by ($0.02). The business had revenue of $254.15 million for the quarter, compared to analyst estimates of $252.94 million. Globus Medical had a return on equity of 11.59% and a net margin of 15.55%. Analysts expect that Globus Medical, Inc. will post 2.03 EPS for the current fiscal year.

Globus Medical, Inc operates as a medical device company that develops and commercializes healthcare solutions. The firm engages in developing products that promote healing in patients with musculoskeletal disorders. It classifies products into Innovative Fusion and Disruptive Technology. It operates through the United States and International geographical segments.

Want to see what other hedge funds are holding GMED? Visit HoldingsChannel.com to get the latest 13F filings and insider trades for Globus Medical, Inc. (NYSE:GMED – Get Rating). 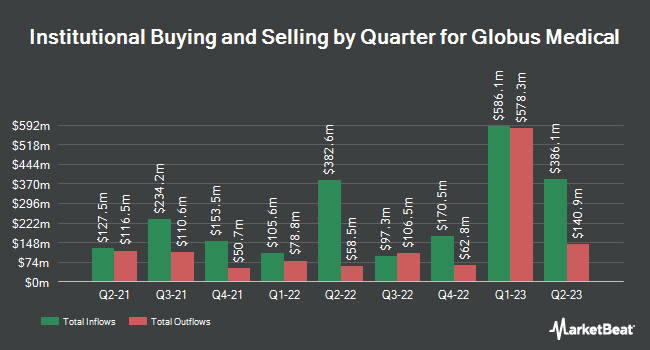 Complete the form below to receive the latest headlines and analysts' recommendations for Globus Medical with our free daily email newsletter: