Crossmark Global Holdings Inc. lessened its holdings in shares of STAAR Surgical (NASDAQ:STAA – Get Rating) by 2.7% during the third quarter, according to the company in its most recent Form 13F filing with the Securities & Exchange Commission. The fund owned 6,230 shares of the medical instruments supplier’s stock after selling 170 shares during the quarter. Crossmark Global Holdings Inc.’s holdings in STAAR Surgical were worth $440,000 at the end of the most recent reporting period.

In related news, major shareholder Broadwood Partners, L.P. purchased 51,985 shares of the stock in a transaction dated Tuesday, December 27th. The stock was bought at an average cost of $47.91 per share, for a total transaction of $2,490,601.35. Following the completion of the acquisition, the insider now owns 8,643,992 shares of the company’s stock, valued at $414,133,656.72. The transaction was disclosed in a document filed with the SEC, which can be accessed through this link. Company insiders own 2.60% of the company’s stock.

STAAR Surgical (NASDAQ:STAA – Get Rating) last announced its quarterly earnings results on Wednesday, November 2nd. The medical instruments supplier reported $0.25 earnings per share (EPS) for the quarter, topping the consensus estimate of $0.13 by $0.12. The company had revenue of $76.05 million during the quarter, compared to the consensus estimate of $74.95 million. STAAR Surgical had a net margin of 13.54% and a return on equity of 15.13%. The company’s revenue for the quarter was up 30.3% compared to the same quarter last year. During the same period in the prior year, the business earned $0.13 earnings per share. On average, equities analysts forecast that STAAR Surgical will post 0.83 EPS for the current fiscal year.

STAAR Surgical Co engages in the development, manufacture, production, marketing, and sale of implantable lenses for the eye and delivery systems used to deliver the lenses into the eye. It specializes in refractive and cataract solutions. Its products include intraocular lens and implantable collamer lens. 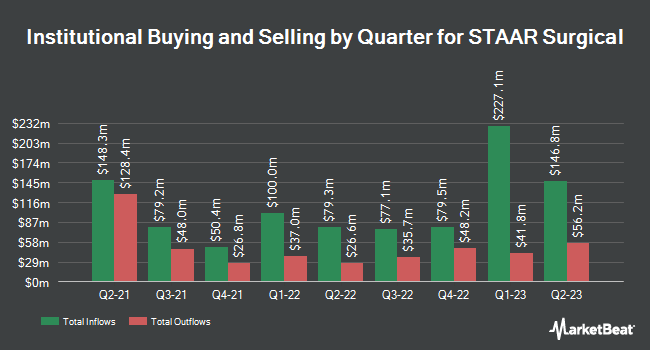 Complete the form below to receive the latest headlines and analysts' recommendations for STAAR Surgical with our free daily email newsletter: