Allspring Global Investments Holdings LLC decreased its holdings in shares of Albertsons Companies, Inc. (NYSE:ACI – Get Rating) by 41.1% in the third quarter, according to its most recent Form 13F filing with the SEC. The institutional investor owned 25,120 shares of the company’s stock after selling 17,541 shares during the period. Allspring Global Investments Holdings LLC’s holdings in Albertsons Companies were worth $624,000 as of its most recent SEC filing.

The business also recently announced a quarterly dividend, which will be paid on Friday, February 10th. Shareholders of record on Thursday, January 26th will be paid a dividend of $0.12 per share. This represents a $0.48 annualized dividend and a yield of 2.28%. The ex-dividend date is Wednesday, January 25th. Albertsons Companies’s dividend payout ratio (DPR) is presently 19.83%.

Albertsons Companies, Inc, through its subsidiaries, engages in the operation of food and drug stores in the United States. The company's food and drug retail stores offer grocery products, general merchandise, health and beauty care products, pharmacy, fuel, and other items and services. It also manufactures and processes food products for sale in stores.

Want to see what other hedge funds are holding ACI? Visit HoldingsChannel.com to get the latest 13F filings and insider trades for Albertsons Companies, Inc. (NYSE:ACI – Get Rating). 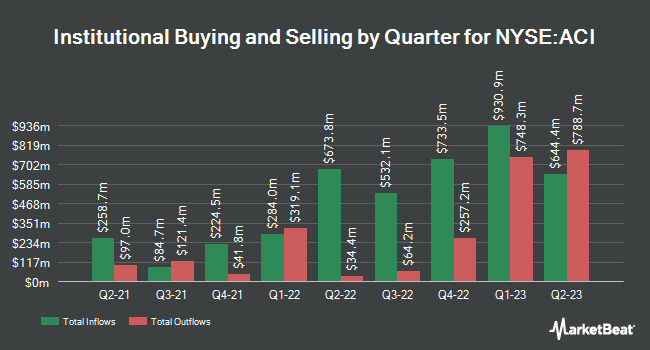