Capri Holdings Limited (NYSE:CPRI – Get Rating) has been given a consensus recommendation of “Moderate Buy” by the twenty research firms that are covering the stock, MarketBeat.com reports. Four analysts have rated the stock with a hold rating and twelve have assigned a buy rating to the company. The average 1-year target price among analysts that have issued ratings on the stock in the last year is $69.00.

Capri (NYSE:CPRI – Get Rating) last announced its quarterly earnings data on Wednesday, November 9th. The company reported $1.79 earnings per share (EPS) for the quarter, topping analysts’ consensus estimates of $1.55 by $0.24. The firm had revenue of $1.41 billion for the quarter, compared to the consensus estimate of $1.40 billion. Capri had a net margin of 14.10% and a return on equity of 38.60%. The business’s revenue for the quarter was up 8.6% on a year-over-year basis. During the same period in the prior year, the company posted $1.53 earnings per share. On average, analysts forecast that Capri will post 6.87 earnings per share for the current fiscal year.

Capri announced that its board has authorized a share repurchase plan on Wednesday, November 9th that permits the company to buyback $1.00 billion in shares. This buyback authorization permits the company to reacquire up to 14.3% of its shares through open market purchases. Shares buyback plans are often a sign that the company’s board believes its stock is undervalued.

Capri Holdings Ltd. operates as a global fashion luxury group. It engages in the design and distribution of sportswear, accessories, footwear and apparel of branded women’s apparel and accessories and men’s apparel. The firm operates through the following segments: Versace, Jimmy Choo, and Michael Kors. 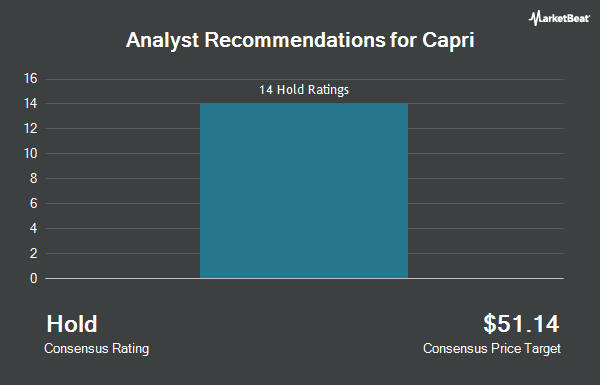