Oregon Public Employees Retirement Fund lessened its holdings in Celsius Holdings, Inc. (NASDAQ:CELH – Get Rating) by 7.2% in the 3rd quarter, according to the company in its most recent Form 13F filing with the SEC. The institutional investor owned 11,705 shares of the company’s stock after selling 910 shares during the quarter. Oregon Public Employees Retirement Fund’s holdings in Celsius were worth $1,061,000 at the end of the most recent reporting period.

CELH has been the topic of several research reports. TheStreet upgraded shares of Celsius from a “d+” rating to a “c” rating in a report on Friday, December 9th. Wedbush assumed coverage on shares of Celsius in a report on Monday, October 10th. They issued a “neutral” rating and a $90.00 price target on the stock. Bank of America started coverage on Celsius in a research note on Friday, January 6th. They set a “neutral” rating and a $104.00 price objective for the company. Credit Suisse Group upped their target price on Celsius from $85.00 to $110.00 and gave the stock a “neutral” rating in a research note on Tuesday, December 6th. Finally, B. Riley lifted their price target on Celsius from $130.00 to $140.00 in a research report on Thursday, November 10th. Three research analysts have rated the stock with a hold rating and three have issued a buy rating to the stock. According to MarketBeat, Celsius has an average rating of “Moderate Buy” and a consensus price target of $109.00.

Celsius (NASDAQ:CELH – Get Rating) last issued its quarterly earnings results on Wednesday, November 9th. The company reported ($0.73) EPS for the quarter, missing the consensus estimate of $0.12 by ($0.85). Celsius had a negative return on equity of 12.52% and a negative net margin of 26.58%. The company had revenue of $188.23 million during the quarter, compared to analysts’ expectations of $163.14 million. Equities research analysts forecast that Celsius Holdings, Inc. will post -2.38 EPS for the current year.

Want to see what other hedge funds are holding CELH? Visit HoldingsChannel.com to get the latest 13F filings and insider trades for Celsius Holdings, Inc. (NASDAQ:CELH – Get Rating). 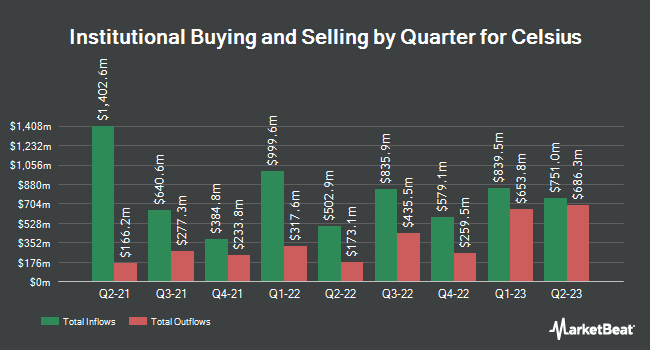 Receive News & Ratings for Celsius Daily - Enter your email address below to receive a concise daily summary of the latest news and analysts' ratings for Celsius and related companies with MarketBeat.com's FREE daily email newsletter.

Complete the form below to receive the latest headlines and analysts' recommendations for Celsius with our free daily email newsletter: