City Holding (NASDAQ:CHCO – Get Rating) Director Tracy W. Hylton II purchased 115 shares of the stock in a transaction dated Monday, January 23rd. The stock was purchased at an average price of $89.56 per share, for a total transaction of $10,299.40. Following the completion of the acquisition, the director now directly owns 57,910 shares in the company, valued at approximately $5,186,419.60. The acquisition was disclosed in a filing with the Securities & Exchange Commission, which is accessible through this hyperlink.

The business also recently disclosed a quarterly dividend, which will be paid on Tuesday, January 31st. Investors of record on Friday, January 13th will be given a $0.65 dividend. This represents a $2.60 annualized dividend and a dividend yield of 2.91%. The ex-dividend date of this dividend is Thursday, January 12th. City’s payout ratio is currently 41.34%.

Hedge Funds Weigh In On City

Separately, StockNews.com cut shares of City from a “hold” rating to a “sell” rating in a report on Tuesday, January 10th. 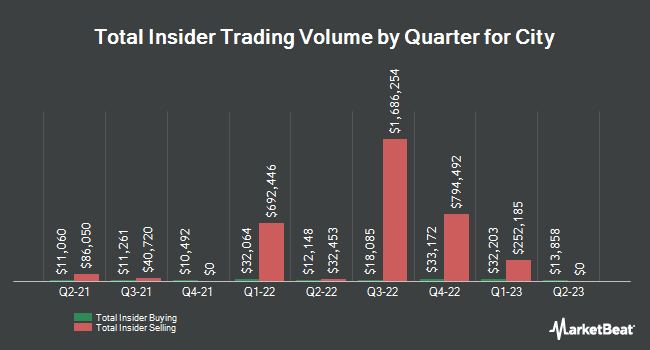