Franklin Resources (NYSE:BEN – Get Rating) had its price objective upped by JPMorgan Chase & Co. from $23.00 to $26.00 in a research report released on Monday morning, Benzinga reports. JPMorgan Chase & Co. currently has a neutral rating on the closed-end fund’s stock.

Franklin Resources (NYSE:BEN – Get Rating) last released its quarterly earnings data on Tuesday, November 1st. The closed-end fund reported $0.78 earnings per share for the quarter, topping the consensus estimate of $0.69 by $0.09. The business had revenue of $1.94 billion during the quarter, compared to analyst estimates of $1.89 billion. Franklin Resources had a return on equity of 15.16% and a net margin of 15.61%. As a group, equities analysts predict that Franklin Resources will post 2.45 EPS for the current fiscal year.

The business also recently announced a quarterly dividend, which was paid on Friday, January 13th. Shareholders of record on Friday, December 30th were issued a dividend of $0.30 per share. This is a positive change from Franklin Resources’s previous quarterly dividend of $0.29. This represents a $1.20 annualized dividend and a yield of 3.95%. The ex-dividend date of this dividend was Thursday, December 29th. Franklin Resources’s dividend payout ratio (DPR) is 47.62%.

In related news, insider Franklin Resources Inc bought 65,118 shares of the business’s stock in a transaction on Monday, October 31st. The shares were bought at an average cost of $4.29 per share, for a total transaction of $279,356.22. Following the completion of the acquisition, the insider now directly owns 9,723,303 shares in the company, valued at $41,712,969.87. The acquisition was disclosed in a legal filing with the SEC, which is available through this link. Insiders have purchased a total of 341,388 shares of company stock worth $1,444,953 over the last three months. Corporate insiders own 23.40% of the company’s stock. 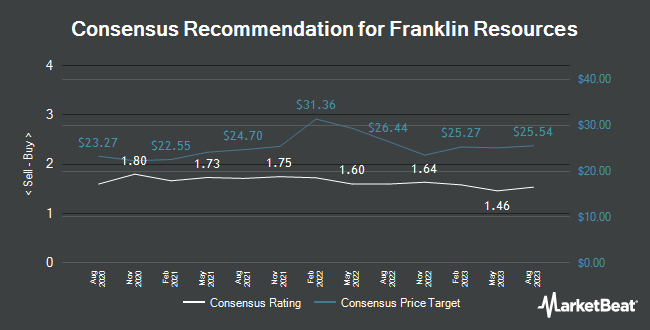