Great West Life Assurance Co. Can bought a new stake in Caesars Entertainment, Inc. (NASDAQ:CZR – Get Rating) during the 3rd quarter, according to its most recent Form 13F filing with the SEC. The firm bought 106,726 shares of the company’s stock, valued at approximately $3,440,000.

In related news, Director Michael E. Pegram bought 25,000 shares of the company’s stock in a transaction that occurred on Friday, November 4th. The shares were bought at an average price of $44.74 per share, for a total transaction of $1,118,500.00. Following the transaction, the director now directly owns 96,697 shares of the company’s stock, valued at $4,326,223.78. The transaction was disclosed in a filing with the Securities & Exchange Commission, which can be accessed through this hyperlink. 0.50% of the stock is owned by corporate insiders.

Caesars Holdings, Inc is a holding company, which engages in the provision of casino-entertainment and hospitality services. It operates through the following segments: Las Vegas, Other U.S., and All Other. The All Other segment includes managed and international properties as well as other business, such as Caesars Interactive Entertainment. 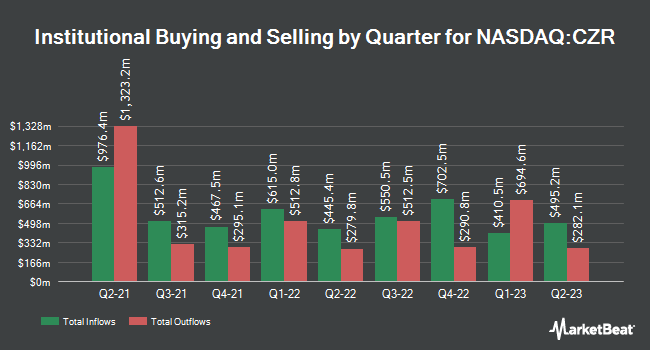 Complete the form below to receive the latest headlines and analysts' recommendations for Caesars Entertainment with our free daily email newsletter: