Equities researchers at StockNews.com began coverage on shares of Sientra (NASDAQ:SIEN – Get Rating) in a research note issued to investors on Tuesday. The firm set a “sell” rating on the medical instruments supplier’s stock.

SIEN has been the subject of several other research reports. William Blair downgraded shares of Sientra from an “outperform” rating to a “market perform” rating in a research note on Tuesday, October 25th. Craig Hallum decreased their price objective on shares of Sientra to $13.00 in a report on Thursday, October 27th. One research analyst has rated the stock with a sell rating, one has issued a hold rating and six have assigned a buy rating to the company’s stock. According to data from MarketBeat.com, Sientra presently has a consensus rating of “Moderate Buy” and a consensus price target of $51.86.

Sientra (NASDAQ:SIEN – Get Rating) last announced its quarterly earnings results on Thursday, November 10th. The medical instruments supplier reported ($2.40) earnings per share for the quarter, missing analysts’ consensus estimates of ($2.30) by ($0.10). Sientra had a negative return on equity of 381.27% and a negative net margin of 76.47%. The firm had revenue of $22.57 million for the quarter, compared to the consensus estimate of $21.80 million. Equities analysts predict that Sientra will post -0.86 EPS for the current fiscal year. 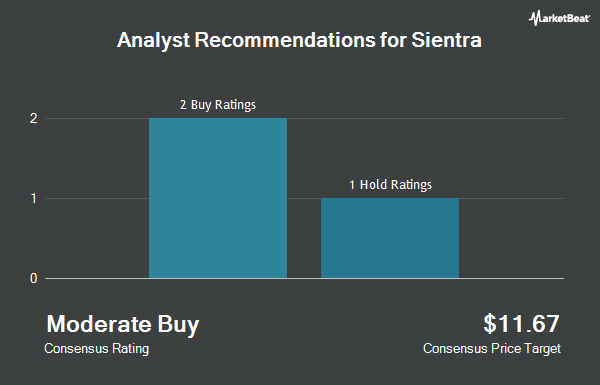