Crossmark Global Holdings Inc. lessened its stake in Synaptics Incorporated (NASDAQ:SYNA – Get Rating) by 32.4% in the 3rd quarter, according to its most recent filing with the SEC. The fund owned 3,250 shares of the software maker’s stock after selling 1,557 shares during the period. Crossmark Global Holdings Inc.’s holdings in Synaptics were worth $322,000 at the end of the most recent quarter.

Synaptics (NASDAQ:SYNA – Get Rating) last issued its quarterly earnings data on Thursday, November 3rd. The software maker reported $2.89 earnings per share for the quarter, beating analysts’ consensus estimates of $2.77 by $0.12. Synaptics had a return on equity of 39.05% and a net margin of 15.53%. The company had revenue of $448.10 million during the quarter, compared to analysts’ expectations of $450.48 million. During the same quarter in the previous year, the business earned $1.98 earnings per share. The firm’s revenue for the quarter was up 20.2% on a year-over-year basis. As a group, analysts expect that Synaptics Incorporated will post 6.72 earnings per share for the current year.

Insider Buying and Selling at Synaptics

Want to see what other hedge funds are holding SYNA? Visit HoldingsChannel.com to get the latest 13F filings and insider trades for Synaptics Incorporated (NASDAQ:SYNA – Get Rating). 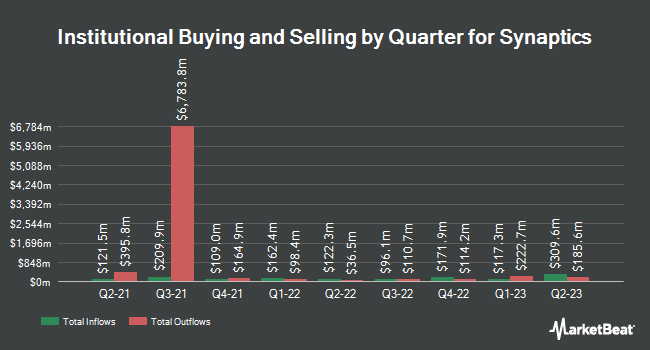