Janney Montgomery Scott LLC boosted its stake in shares of Trinity Industries, Inc. (NYSE:TRN – Get Rating) by 10.6% in the 3rd quarter, according to the company in its most recent disclosure with the Securities and Exchange Commission. The institutional investor owned 16,909 shares of the transportation company’s stock after acquiring an additional 1,624 shares during the quarter. Janney Montgomery Scott LLC’s holdings in Trinity Industries were worth $361,000 at the end of the most recent reporting period.

Trinity Industries (NYSE:TRN – Get Rating) last posted its earnings results on Tuesday, October 25th. The transportation company reported $0.34 EPS for the quarter, beating analysts’ consensus estimates of $0.31 by $0.03. Trinity Industries had a return on equity of 3.96% and a net margin of 8.76%. The company had revenue of $496.60 million for the quarter, compared to the consensus estimate of $708.00 million. On average, research analysts predict that Trinity Industries, Inc. will post 0.98 EPS for the current year.

The firm also recently announced a quarterly dividend, which will be paid on Tuesday, January 31st. Shareholders of record on Friday, January 13th will be given a $0.26 dividend. The ex-dividend date of this dividend is Thursday, January 12th. This represents a $1.04 dividend on an annualized basis and a yield of 3.77%. This is an increase from Trinity Industries’s previous quarterly dividend of $0.23. Trinity Industries’s payout ratio is currently 60.82%.

Trinity Industries announced that its board has initiated a stock buyback plan on Thursday, December 8th that permits the company to repurchase $250.00 million in outstanding shares. This repurchase authorization permits the transportation company to reacquire up to 10.1% of its stock through open market purchases. Stock repurchase plans are often a sign that the company’s management believes its shares are undervalued.

Want to see what other hedge funds are holding TRN? Visit HoldingsChannel.com to get the latest 13F filings and insider trades for Trinity Industries, Inc. (NYSE:TRN – Get Rating). 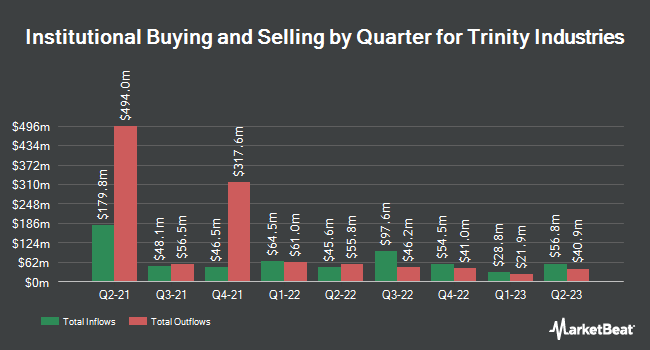 Complete the form below to receive the latest headlines and analysts' recommendations for Trinity Industries with our free daily email newsletter: