JPMorgan Chase & Co. began coverage on shares of CyberArk Software (NASDAQ:CYBR – Get Rating) in a research note published on Tuesday morning, The Fly reports. The brokerage issued a neutral rating and a $147.00 price target on the technology company’s stock.

CyberArk Software (NASDAQ:CYBR – Get Rating) last released its quarterly earnings results on Thursday, November 3rd. The technology company reported ($0.67) earnings per share (EPS) for the quarter, beating analysts’ consensus estimates of ($0.90) by $0.23. CyberArk Software had a negative return on equity of 16.23% and a negative net margin of 21.79%. The business had revenue of $152.67 million during the quarter, compared to analysts’ expectations of $151.18 million. As a group, equities research analysts expect that CyberArk Software will post -3.43 earnings per share for the current fiscal year.

CyberArk Software Ltd. engages in the development, market, and sale of access security software solutions. The firm’s products include Privilege, Access, and DevSecOps. It offers its products and services to banking, insurance, healthcare, and federal industries. The company was founded by Udi Mokady and Alon Cohen in 1999 and is headquartered in Petah Tikva, Israel. 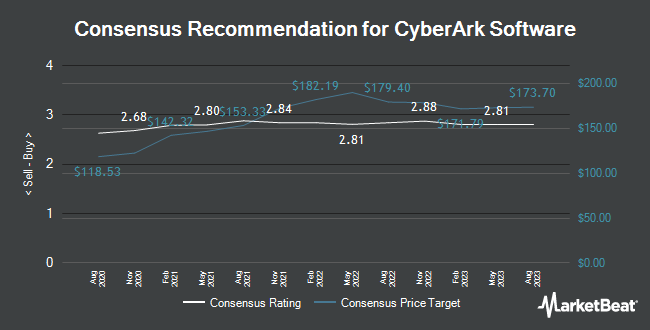 Complete the form below to receive the latest headlines and analysts' recommendations for CyberArk Software with our free daily email newsletter: