Neuronetics, Inc. (NASDAQ:STIM – Get Rating) SVP William Andrew Macan sold 16,046 shares of the stock in a transaction that occurred on Monday, January 23rd. The stock was sold at an average price of $5.96, for a total transaction of $95,634.16. Following the completion of the sale, the senior vice president now owns 338,719 shares of the company’s stock, valued at approximately $2,018,765.24. The transaction was disclosed in a filing with the SEC, which can be accessed through this link.

Neuronetics (NASDAQ:STIM – Get Rating) last released its quarterly earnings results on Tuesday, November 8th. The company reported ($0.28) earnings per share for the quarter, beating analysts’ consensus estimates of ($0.44) by $0.16. The business had revenue of $16.50 million for the quarter, compared to the consensus estimate of $14.79 million. Neuronetics had a negative net margin of 58.85% and a negative return on equity of 49.80%. Sell-side analysts forecast that Neuronetics, Inc. will post -1.51 earnings per share for the current fiscal year.

Separately, Canaccord Genuity Group raised their price target on shares of Neuronetics from $9.00 to $10.00 in a report on Wednesday, November 9th.

Neuronetics, Inc commercial stage medical technology company, which engages in the designing, developing and marketing products for the patients suffering from psychiatric disorders. It operates through United States and International geographical segments. The firm offers NeuroStar TMS, a therapy system for the treatment of major depressive disorders in adult patients. 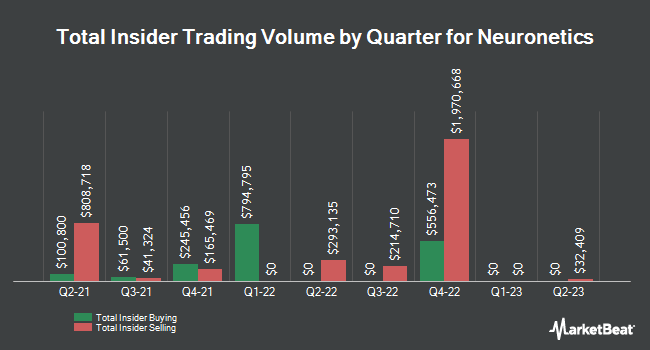 Complete the form below to receive the latest headlines and analysts' recommendations for Neuronetics with our free daily email newsletter: