Oregon Public Employees Retirement Fund cut its stake in shares of Federated Hermes, Inc. (NYSE:FHI – Get Rating) by 7.3% in the third quarter, according to the company in its most recent Form 13F filing with the Securities & Exchange Commission. The firm owned 24,736 shares of the company’s stock after selling 1,961 shares during the period. Oregon Public Employees Retirement Fund’s holdings in Federated Hermes were worth $819,000 as of its most recent SEC filing.

Federated Hermes (NYSE:FHI – Get Rating) last released its earnings results on Thursday, October 27th. The company reported $0.78 earnings per share (EPS) for the quarter, beating analysts’ consensus estimates of $0.69 by $0.09. The business had revenue of $381.14 million for the quarter, compared to the consensus estimate of $373.91 million. Federated Hermes had a return on equity of 25.31% and a net margin of 18.05%. As a group, sell-side analysts forecast that Federated Hermes, Inc. will post 2.87 EPS for the current fiscal year.

A number of analysts have recently commented on the company. Deutsche Bank Aktiengesellschaft boosted their price target on Federated Hermes from $42.00 to $44.00 in a report on Wednesday, January 11th. StockNews.com assumed coverage on Federated Hermes in a report on Wednesday, October 12th. They issued a “buy” rating on the stock. Finally, Royal Bank of Canada boosted their price target on Federated Hermes from $33.00 to $35.00 and gave the company a “sector perform” rating in a report on Tuesday, November 1st. One investment analyst has rated the stock with a sell rating, one has issued a hold rating and three have assigned a buy rating to the stock. According to data from MarketBeat.com, the company presently has a consensus rating of “Hold” and an average target price of $35.10. 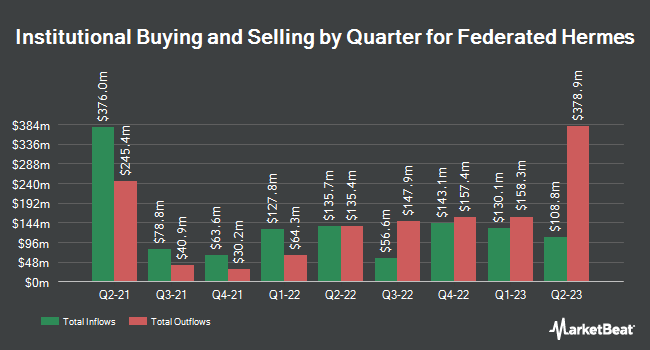 Complete the form below to receive the latest headlines and analysts' recommendations for Federated Hermes with our free daily email newsletter: