Qorvo (NASDAQ:QRVO – Get Rating) will be issuing its quarterly earnings data after the market closes on Wednesday, February 1st. Analysts expect the company to announce earnings of $0.64 per share for the quarter. Qorvo has set its Q4 2023 guidance at $0.50-$0.75 EPS and its Q3 guidance at $0.50-0.75 EPS.Parties that are interested in registering for the company’s conference call can do so using this link.

Qorvo (NASDAQ:QRVO – Get Rating) last announced its quarterly earnings data on Wednesday, November 2nd. The semiconductor company reported $2.35 earnings per share (EPS) for the quarter, topping analysts’ consensus estimates of $2.28 by $0.07. Qorvo had a net margin of 15.34% and a return on equity of 24.47%. The firm had revenue of $1.16 billion for the quarter, compared to the consensus estimate of $1.13 billion. During the same period in the prior year, the company posted $3.22 earnings per share. The business’s revenue for the quarter was down 7.7% on a year-over-year basis. On average, analysts expect Qorvo to post $5 EPS for the current fiscal year and $6 EPS for the next fiscal year.

In related news, VP Gina Harrison sold 3,559 shares of the business’s stock in a transaction on Tuesday, December 13th. The shares were sold at an average price of $104.00, for a total transaction of $370,136.00. Following the transaction, the vice president now owns 16,257 shares in the company, valued at approximately $1,690,728. The transaction was disclosed in a filing with the Securities & Exchange Commission, which can be accessed through this hyperlink. Company insiders own 0.45% of the company’s stock. 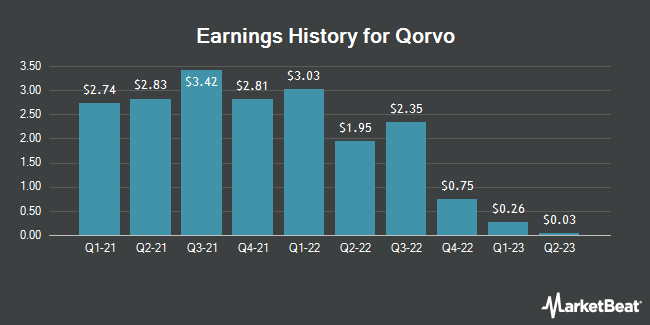