Voyager Therapeutics, Inc. (NASDAQ:VYGR – Get Rating) major shareholder Rock Ventures Iii L.P. Third sold 55,000 shares of the business’s stock in a transaction on Monday, January 23rd. The stock was sold at an average price of $9.06, for a total transaction of $498,300.00. Following the completion of the transaction, the insider now owns 5,273,933 shares in the company, valued at approximately $47,781,832.98. The sale was disclosed in a legal filing with the SEC, which is available through this link. Large shareholders that own 10% or more of a company’s shares are required to disclose their transactions with the SEC.

Separately, StockNews.com upgraded shares of Voyager Therapeutics from a “hold” rating to a “buy” rating in a research note on Monday, November 14th.

Voyager Therapeutics, Inc is a clinical-stage gene therapy company, which engages in the development of treatments for severe neurological diseases. Its pipeline of gene therapy programs includes VY-AADC, VY-SOD101, VY-HTT01, VY-FXN01, Tau Program, and VY-NAV01. The company was founded by Guang Ping Gao, Mark A. 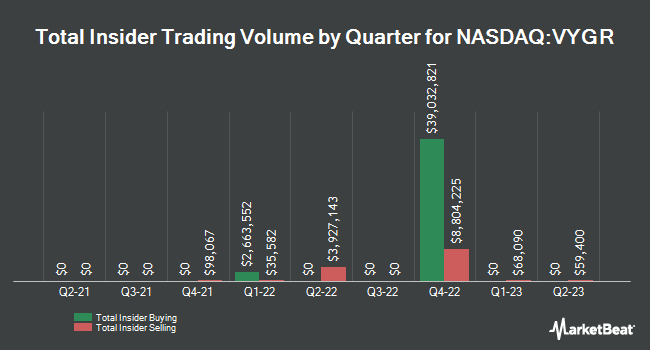 Complete the form below to receive the latest headlines and analysts' recommendations for Voyager Therapeutics with our free daily email newsletter: