Turkey Officially Out of F-35 Project

The United States National Defence Authorization Act (NDAA) 2021 has authorized the Air Force to utilize, modify, and operate six Turkish F-35s that were manufactured but never delivered because Turkey was suspended from the F-35 program.

The NDAA which is expected to be passed into law will mean the official exit from the F-35 program for Turkey for continuing with the purchase and operation of the Russian S-400 air defence system (ADS).

Of the six aircraft, two were being used to train Turkish pilots when the row with the US broke out in 2018.

The U.S. Senate Armed Services Committee said on Thursday it had authorized $9.1 billion to procure 95 F-35 aircraft in its version of the 2021 National Defense Authorization Act, or NDAA.

Turkey was originally planning to purchase 100 F-35 jets and took ceremonial delivery of the first two in June 2018.

Turkey's partnership in the F-35 alliance was halted once the country received a first batch of Russian-made S-400 air defence system batteries last summer. Dozens of Turkish pilots and personnel were sent back to Turkey after its membership was frozen in early August. 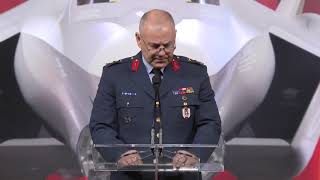 US hands over Six jets meant for Ankara to US...