Continental Resources (NYSE:CLR – Get Rating) had its price target hoisted by equities researchers at Morgan Stanley from $53.00 to $70.00 in a note issued to investors on Friday, Benzinga reports. The brokerage presently has an “underweight” rating on the oil and natural gas company’s stock. Morgan Stanley’s target price suggests a potential upside of 13.23% from the stock’s current price.

Continental Resources (NYSE:CLR – Get Rating) last posted its quarterly earnings results on Monday, February 14th. The oil and natural gas company reported $1.79 earnings per share (EPS) for the quarter, topping analysts’ consensus estimates of $1.73 by $0.06. The firm had revenue of $1.93 billion for the quarter, compared to analysts’ expectations of $1.71 billion. Continental Resources had a return on equity of 23.67% and a net margin of 29.04%. The company’s revenue for the quarter was up 130.0% compared to the same quarter last year. During the same period in the prior year, the business earned ($0.23) EPS. On average, analysts expect that Continental Resources will post 9.89 EPS for the current fiscal year. 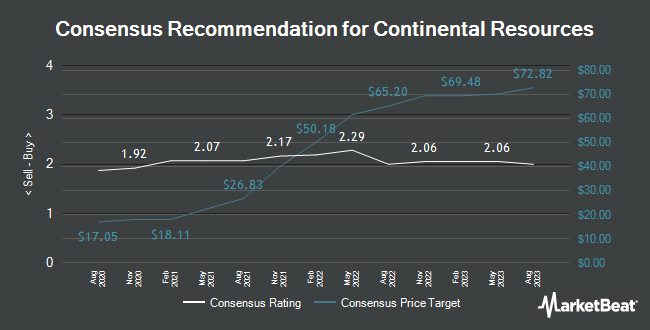