NeoPhotonics (NYSE:NPTN – Get Rating) announced its quarterly earnings results on Thursday. The semiconductor company reported $0.04 earnings per share for the quarter, beating the consensus estimate of ($0.03) by $0.07, Briefing.com reports. NeoPhotonics had a negative net margin of 14.03% and a negative return on equity of 20.38%. The firm had revenue of $89.27 million for the quarter, compared to analysts’ expectations of $82.02 million. During the same quarter in the previous year, the company posted ($0.15) EPS. The company’s revenue was up 46.5% compared to the same quarter last year.

A number of research analysts have commented on NPTN shares. StockNews.com assumed coverage on shares of NeoPhotonics in a research report on Thursday, March 31st. They issued a “hold” rating on the stock. Zacks Investment Research lowered shares of NeoPhotonics from a “buy” rating to a “hold” rating in a research note on Thursday, January 6th. Finally, Rosenblatt Securities started coverage on shares of NeoPhotonics in a research note on Thursday, March 24th. They issued a “neutral” rating and a $16.00 price target on the stock. Eight investment analysts have rated the stock with a hold rating and two have issued a buy rating to the company’s stock. According to data from MarketBeat.com, the company currently has an average rating of “Hold” and a consensus target price of $16.00.

In other news, CEO Timothy Storrs Jenks sold 17,040 shares of the business’s stock in a transaction that occurred on Wednesday, April 13th. The stock was sold at an average price of $15.16, for a total value of $258,326.40. Following the completion of the sale, the chief executive officer now directly owns 492,916 shares in the company, valued at approximately $7,472,606.56. The sale was disclosed in a document filed with the Securities & Exchange Commission, which is available through this hyperlink. Insiders have sold a total of 50,094 shares of company stock worth $765,208 over the last 90 days. 5.30% of the stock is owned by company insiders. 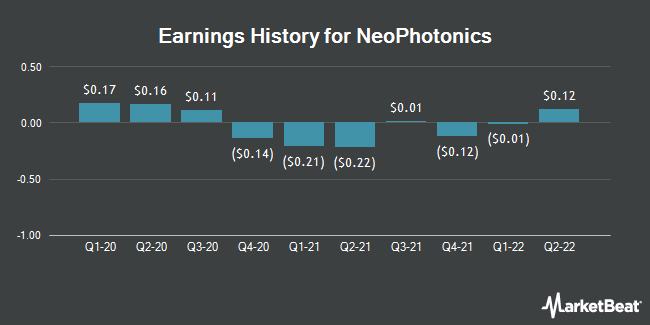 $12.07 Million in Sales Expected for Exagen Inc. This Quarter

$52.85 Billion in Sales Expected for Microsoft Co. This Quarter

Complete the form below to receive the latest headlines and analysts' recommendations for NeoPhotonics with our free daily email newsletter: