Equities analysts expect Abiomed, Inc. (NASDAQ:ABMD – Get Rating) to announce earnings per share (EPS) of $1.05 for the current fiscal quarter, according to Zacks. Six analysts have made estimates for Abiomed’s earnings, with the lowest EPS estimate coming in at $0.98 and the highest estimate coming in at $1.15. Abiomed reported earnings of $1.10 per share in the same quarter last year, which would indicate a negative year-over-year growth rate of 4.5%. The firm is scheduled to issue its next earnings report on Monday, January 1st.

According to Zacks, analysts expect that Abiomed will report full-year earnings of $4.62 per share for the current financial year, with EPS estimates ranging from $4.40 to $5.00. For the next year, analysts expect that the business will post earnings of $5.58 per share, with EPS estimates ranging from $5.28 to $6.12. Zacks Investment Research’s EPS calculations are a mean average based on a survey of research analysts that cover Abiomed.

Abiomed (NASDAQ:ABMD – Get Rating) last announced its quarterly earnings results on Thursday, April 28th. The medical equipment provider reported $1.16 earnings per share for the quarter, beating the consensus estimate of $1.09 by $0.07. The firm had revenue of $269.50 million for the quarter, compared to analysts’ expectations of $267.67 million. Abiomed had a net margin of 13.23% and a return on equity of 14.47%. The company’s revenue was up 11.7% compared to the same quarter last year. During the same quarter in the previous year, the company posted $1.24 EPS.

Abiomed, Inc engages in the research, development, and sale of medical devices to assist or replace the pumping function of the failing heart. It also provides a continuum of care to heart failure patients. The company offers Impella 2.5, a percutaneous micro heart pump with integrated motor and sensors; and Impella CP, a device for use by interventional cardiologists to support patients in the cath lab, as well as by cardiac surgeons in the heart surgery suite. 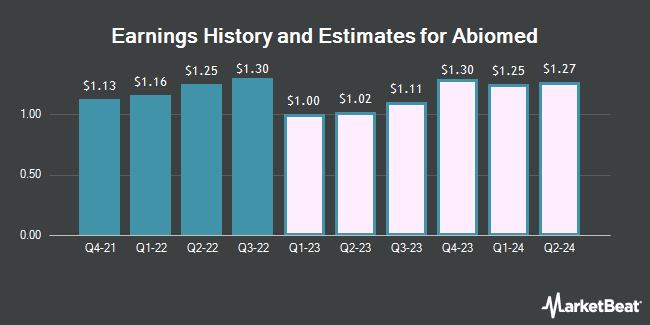 Receive News & Ratings for Abiomed Daily - Enter your email address below to receive a concise daily summary of the latest news and analysts' ratings for Abiomed and related companies with MarketBeat.com's FREE daily email newsletter.

Complete the form below to receive the latest headlines and analysts' recommendations for Abiomed with our free daily email newsletter: