Wall Street analysts predict that STORE Capital Co. (NYSE:STOR – Get Rating) will report $195.59 million in sales for the current fiscal quarter, Zacks reports. Two analysts have issued estimates for STORE Capital’s earnings, with estimates ranging from $195.30 million to $195.88 million. STORE Capital reported sales of $169.33 million during the same quarter last year, which indicates a positive year-over-year growth rate of 15.5%. The company is expected to issue its next earnings report after the market closes on Monday, January 1st.

According to Zacks, analysts expect that STORE Capital will report full-year sales of $800.53 million for the current year, with estimates ranging from $785.86 million to $815.20 million. For the next financial year, analysts expect that the firm will report sales of $852.28 million, with estimates ranging from $792.17 million to $912.40 million. Zacks Investment Research’s sales averages are an average based on a survey of sell-side research analysts that cover STORE Capital.

STORE Capital (NYSE:STOR – Get Rating) last announced its quarterly earnings results on Wednesday, February 23rd. The real estate investment trust reported $0.28 earnings per share for the quarter, missing analysts’ consensus estimates of $0.49 by ($0.21). The firm had revenue of $209.23 million for the quarter, compared to the consensus estimate of $201.56 million. STORE Capital had a return on equity of 5.08% and a net margin of 34.29%. The company’s revenue for the quarter was up 21.0% compared to the same quarter last year. During the same period in the prior year, the business earned $0.44 earnings per share.

STOR has been the topic of a number of recent analyst reports. Zacks Investment Research cut shares of STORE Capital from a “buy” rating to a “hold” rating in a research report on Tuesday, February 15th. BMO Capital Markets lowered shares of STORE Capital from a “market perform” rating to an “underperform” rating and reduced their target price for the stock from $37.00 to $29.00 in a research note on Monday, March 7th. Capital One Financial reissued an “overweight” rating on shares of STORE Capital in a research note on Friday, January 21st. Morgan Stanley cut their price target on STORE Capital from $36.00 to $35.00 and set an “equal weight” rating on the stock in a report on Monday, March 7th. Finally, StockNews.com began coverage on STORE Capital in a report on Thursday, March 31st. They issued a “hold” rating on the stock. One investment analyst has rated the stock with a sell rating, seven have issued a hold rating and one has issued a buy rating to the company’s stock. According to data from MarketBeat.com, the stock currently has an average rating of “Hold” and an average target price of $34.86.

The business also recently announced a quarterly dividend, which was paid on Friday, April 15th. Investors of record on Thursday, March 31st were given a $0.385 dividend. This represents a $1.54 dividend on an annualized basis and a dividend yield of 5.45%. The ex-dividend date of this dividend was Wednesday, March 30th. STORE Capital’s dividend payout ratio is currently 154.00%.

STORE Capital Corporation is an internally managed net-lease real estate investment trust, or REIT, that is the leader in the acquisition, investment and management of Single Tenant Operational Real Estate, which is its target market and the inspiration for its name. STORE Capital is one of the largest and fastest growing net-lease REITs and owns a large, well-diversified portfolio that consists of investments in more than 2,500 property locations across the United States, substantially all of which are profit centers. 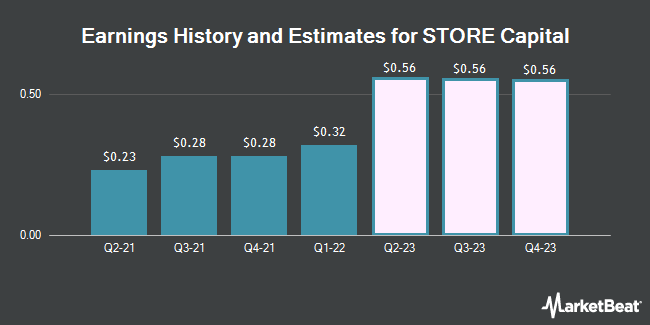 $104.37 Million in Sales Expected for Myovant Sciences Ltd. This Quarter

$53.97 Million in Sales Expected for Smart Sand, Inc. This Quarter

Complete the form below to receive the latest headlines and analysts' recommendations for STORE Capital with our free daily email newsletter: