Switch (NYSE:SWCH – Get Rating) was downgraded by research analysts at Jefferies Financial Group from a “buy” rating to a “hold” rating in a research report issued to clients and investors on Wednesday, The Fly reports.

SWCH has been the topic of a number of other reports. TheStreet downgraded Switch from a “b-” rating to a “c-” rating in a research note on Friday, February 25th. Barclays lifted their target price on Switch from $28.00 to $30.00 and gave the company an “overweight” rating in a research report on Friday, January 14th. Zacks Investment Research cut Switch from a “hold” rating to a “sell” rating in a report on Tuesday, May 3rd. Credit Suisse Group raised their price target on Switch from $28.00 to $35.00 and gave the company an “outperform” rating in a report on Thursday, April 7th. Finally, Wells Fargo & Company cut Switch from an “overweight” rating to an “equal weight” rating and raised their price target for the company from $28.00 to $31.00 in a report on Friday, March 25th. One investment analyst has rated the stock with a sell rating, two have given a hold rating, eight have issued a buy rating and one has assigned a strong buy rating to the stock. According to data from MarketBeat, Switch currently has an average rating of “Buy” and a consensus price target of $29.91.

Switch (NYSE:SWCH – Get Rating) last released its quarterly earnings results on Tuesday, May 10th. The company reported $0.04 earnings per share (EPS) for the quarter, missing analysts’ consensus estimates of $0.05 by ($0.01). The firm had revenue of $164.60 million during the quarter, compared to analysts’ expectations of $163.82 million. Switch had a return on equity of 3.50% and a net margin of 0.91%. The business’s quarterly revenue was up 25.7% on a year-over-year basis. During the same quarter last year, the business earned $0.08 earnings per share. On average, equities analysts predict that Switch will post 0.2 earnings per share for the current year.

In other Switch news, Director Thomas A. Thomas sold 40,000 shares of the business’s stock in a transaction that occurred on Monday, April 18th. The stock was sold at an average price of $30.73, for a total transaction of $1,229,200.00. Following the completion of the transaction, the director now owns 2,658,397 shares in the company, valued at $81,692,539.81. The sale was disclosed in a document filed with the Securities & Exchange Commission, which can be accessed through this link. 29.18% of the stock is owned by insiders. 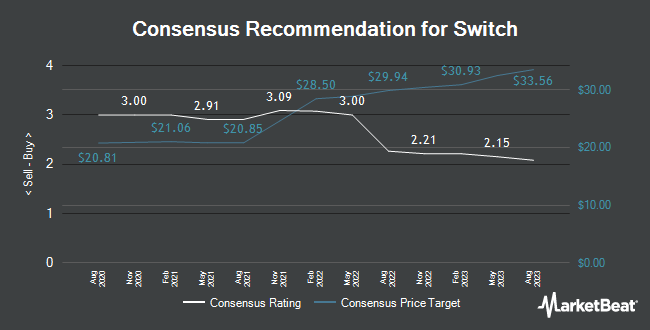