Umpqua Holdings Co. (NASDAQ:UMPQ – Get Rating) has earned a consensus recommendation of “Hold” from the seven brokerages that are covering the stock, Marketbeat reports. Seven analysts have rated the stock with a hold rating. The average 1-year price objective among brokers that have updated their coverage on the stock in the last year is $20.63.

Umpqua (NASDAQ:UMPQ – Get Rating) last issued its quarterly earnings data on Wednesday, April 20th. The bank reported $0.42 EPS for the quarter, topping analysts’ consensus estimates of $0.39 by $0.03. Umpqua had a return on equity of 14.89% and a net margin of 31.34%. The firm had revenue of $308.73 million during the quarter, compared to the consensus estimate of $296.38 million. During the same period in the prior year, the business earned $0.49 EPS. The firm’s revenue was down 6.5% on a year-over-year basis. As a group, equities analysts predict that Umpqua will post 1.66 earnings per share for the current year.

The company also recently disclosed a quarterly dividend, which was paid on Friday, May 27th. Stockholders of record on Monday, May 16th were issued a $0.21 dividend. The ex-dividend date of this dividend was Friday, May 13th. This represents a $0.84 annualized dividend and a dividend yield of 4.67%. Umpqua’s dividend payout ratio (DPR) is 45.41%.

In related news, Director Luis Machuca bought 7,600 shares of Umpqua stock in a transaction dated Thursday, April 28th. The stock was acquired at an average cost of $17.29 per share, with a total value of $131,404.00. Following the completion of the acquisition, the director now directly owns 70,718 shares in the company, valued at approximately $1,222,714.22. The purchase was disclosed in a legal filing with the Securities & Exchange Commission, which can be accessed through this hyperlink. Also, insider Torran B. Nixon sold 5,000 shares of the company’s stock in a transaction on Wednesday, April 27th. The shares were sold at an average price of $17.67, for a total value of $88,350.00. Following the sale, the insider now directly owns 216,033 shares of the company’s stock, valued at $3,817,303.11. The disclosure for this sale can be found here. Corporate insiders own 0.58% of the company’s stock.

About Umpqua (Get Rating) 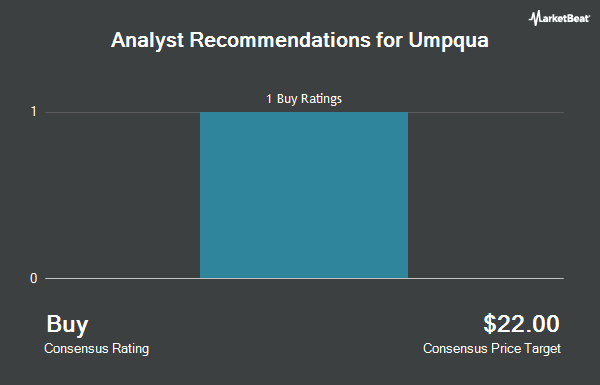