Signaturefd LLC raised its position in STORE Capital Co. (NYSE:STOR – Get Rating) by 28.8% in the 1st quarter, according to the company in its most recent filing with the Securities & Exchange Commission. The institutional investor owned 3,032 shares of the real estate investment trust’s stock after acquiring an additional 678 shares during the period. Signaturefd LLC’s holdings in STORE Capital were worth $89,000 as of its most recent SEC filing.

STORE Capital (NYSE:STOR – Get Rating) last announced its quarterly earnings data on Wednesday, May 4th. The real estate investment trust reported $0.32 EPS for the quarter, beating analysts’ consensus estimates of $0.26 by $0.06. The firm had revenue of $222.12 million for the quarter, compared to analyst estimates of $212.11 million. STORE Capital had a return on equity of 5.65% and a net margin of 36.52%. The business’s quarterly revenue was up 21.9% compared to the same quarter last year. During the same period last year, the company earned $0.47 EPS. As a group, sell-side analysts forecast that STORE Capital Co. will post 2.18 earnings per share for the current fiscal year.

The company also recently disclosed a quarterly dividend, which was paid on Friday, July 15th. Shareholders of record on Thursday, June 30th were given a $0.385 dividend. The ex-dividend date was Wednesday, June 29th. This represents a $1.54 dividend on an annualized basis and a yield of 5.49%. STORE Capital’s payout ratio is 138.74%.

STORE Capital Corporation is an internally managed net-lease real estate investment trust, or REIT, that is the leader in the acquisition, investment and management of Single Tenant Operational Real Estate, which is its target market and the inspiration for its name. STORE Capital is one of the largest and fastest growing net-lease REITs and owns a large, well-diversified portfolio that consists of investments in more than 2,500 property locations across the United States, substantially all of which are profit centers.

Want to see what other hedge funds are holding STOR? Visit HoldingsChannel.com to get the latest 13F filings and insider trades for STORE Capital Co. (NYSE:STOR – Get Rating). 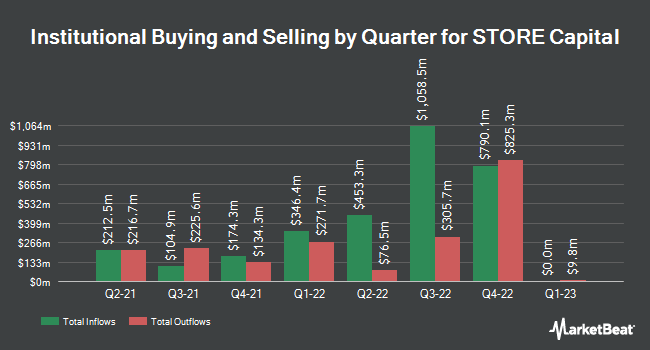 Complete the form below to receive the latest headlines and analysts' recommendations for STORE Capital with our free daily email newsletter: